What is Tai Chi

Tai Chi is a traditional Chinese practice consisting of flowing movements – shapes flowing one into another like a slow dance.

The forms have poetic names, often associated with animals or objects – “the white crane flaps its wings”, “the horse whips”, “the lute plays” – and are combined into continuous complexes.

In addition to the movements, an important aspect of the practice is control of the breath and concentration on body position and state of mind. All of this together turns the practice into a kind of meditation in motion.

Tai chi was originally developed in China as a martial art – tai chi chuan (“great limit fist”). However, around the world, the practice has become known as a gymnastics with a very gentle effect on the body.

Since most styles of tai chi do not involve sudden movements, force or impact, or extreme joint positions, this practice is often used as an exercise system for people at an advanced age and during recovery from illness and injury. 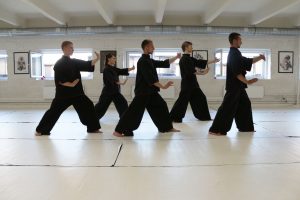 The main part of tai chi studies was conducted on people aged 60-80 years old, as well as on patients with various diseases that reduce the quality of life. As a result, it was found out that this gymnastics helps people weakened by age or illness to improve their physical condition in several directions at once.